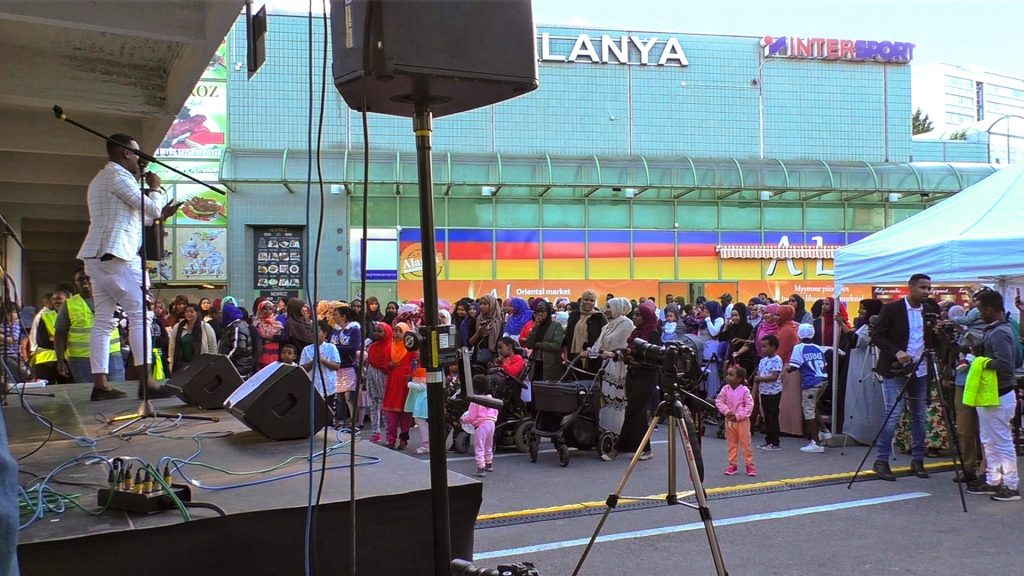 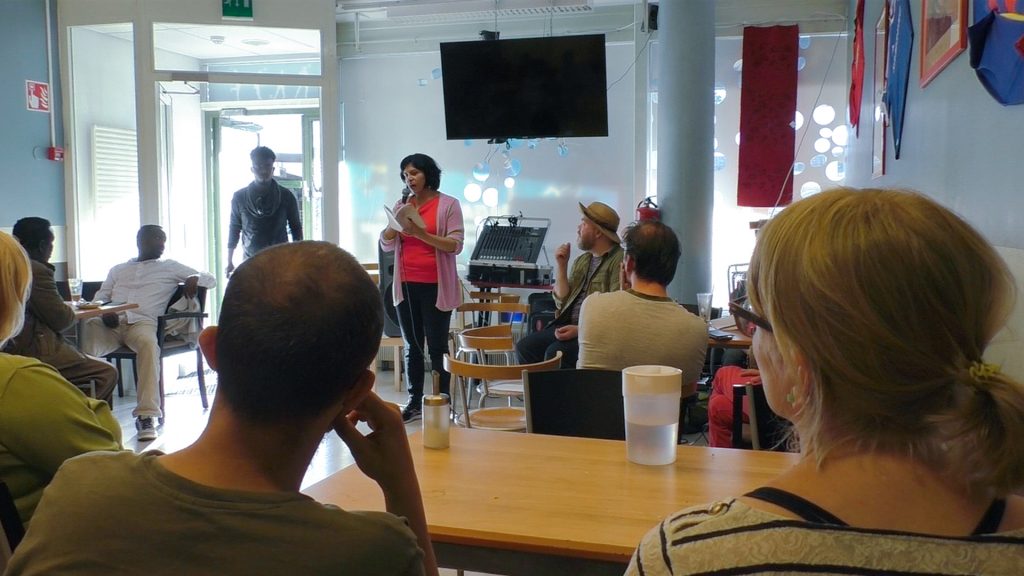 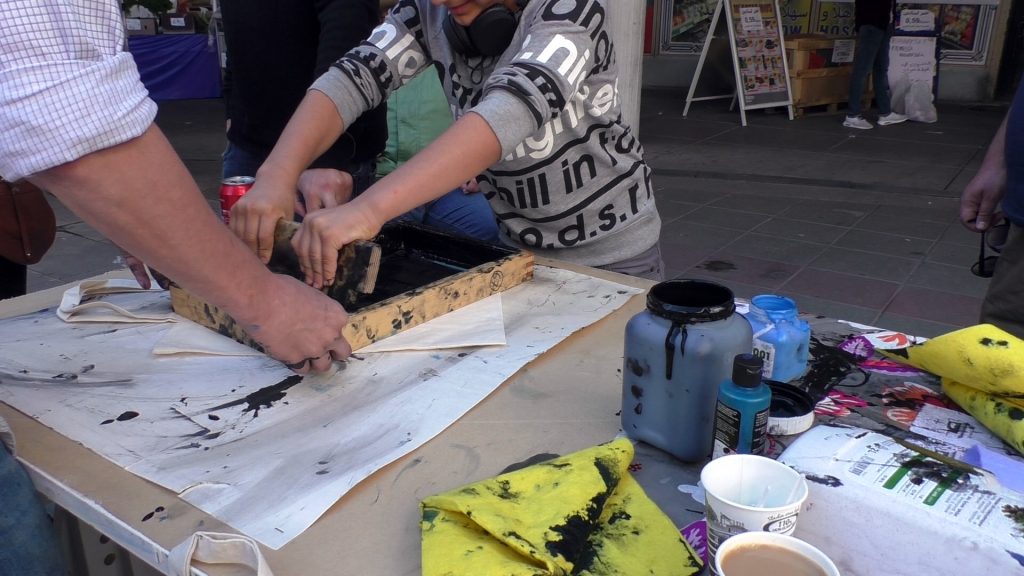 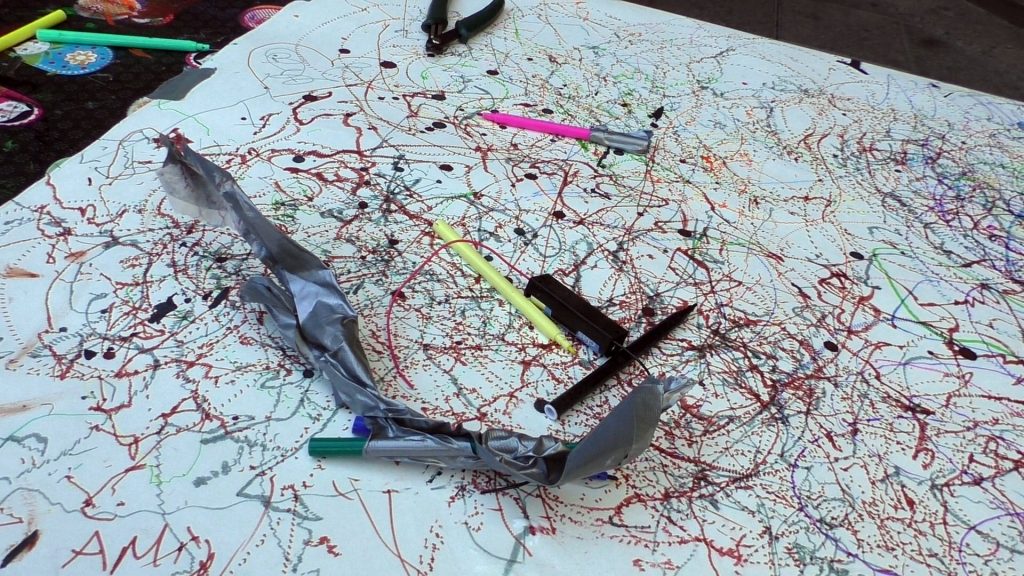 Puhos ♡ People 2017 was a cultural festival for the whole family. The event which gathered around one thousand participants took place on 5th of August 2017 at the Puhos Mall in Itäkeskus area of Helsinki. Consisting of various different communities and shops, cafes, restaurants and mosques ran by multiligual communities Puhos is currently one of the main transcultural hub´s of the Helsinki City. The area is spontaneously developed intercultural meeting place which gathers together people from various backgrounds.

The festival´s background lay on the late 2016 published news of demolishing the Puhos mall. To sustain that the mall would continue gathering people together also in the future, the local communities produced the festival, which aimed to support the cultural activation and visibility of the Puhos mall.

15:15 I BanglaFin is a band promoting cultural integrity through fusion of Finnish and Bengali traditional music . Since 2009 the band has performed several concerts across Finland.

15:45 I Introducing Communities of Puhos

16:15 I Dimitri Paile is a Helsinki based vocalist, guitarist, and songwriter. After playing guitar, bass, and drums in local punk bands like Beastmilk, BOLT, and Våld, Dimitri is now writing and performing melancholy ballads for the weary.

17:00 I Pirata Boing is Spanish, Portuguese and English performing band combining Latin American reggae, hip hop and various other musical genres. Since 2001 the band has performed in diverse events and festivals around Europe and Latin America.

18:15 I Es-Ow is Helsinki based musician with Senegalian roots. Diato has performed in various festivals in Africa and Europe wowing his audience with mellow afro vibes.

19:00 I Taha is a Finnish singing hip hop artists who started his career in Ambizionz band.

19:45 I Aweys Shambi is a raising star among Finnish Somali youths. Shambi is a charismatic performer who is known from his exceptional skill to participate and captivate his audience. Shambi is the only Finnish musician mastering the Somalian Shirb-music.

20:30 I Asma Love(ET) is a Somalian musician who´s soul, jazz and R&B based music  has made him internationally acclaimed performer among East-African communities in Middle-East, East-Africa and Europe.

18:15 I Monineuvot Poetry Club features poets from different language backgrounds. Among their earlier production the poets will perform new poetry written for Puhos ♡ People festival. The club is hosted by writer Ville Ropponen.

Muhaned Durubi is an Iraqi visual Artist and a poet who has escaped to Finland in 2014 and since then participated in various poetry events and actively held exhibitions in Helsinki. He is a member of Iraqi Artist Society and Kiila Organisation for Artists’ and writers’.

Zoila Forss is a Peruvian-Finnish poet who´s bilingual debut poetry collection Revontuli was published in 2014 both in Finnish and Spanish languages. Forss has performed in various poetry events and since 2013 she has participated to a multilingual poetry project Sivuvalo. During last years Forss has collaborated in many translation projects.

Lasse Hauerwaas is an European poet, who spend his time on pages of history books, Helsinki, Athens and Munchen. Hauerwaas has published four poetry collections, the most recent one titled Jats (Enostone, 2016). Hauerwaas is known from his anarchistic poems which vary from rants to modest contemplations about entitlement of humanity.

Hamdam Zakirov is an Uzbekistan born poet who has lived in Finland since 2001. His poems and articles has been published in various countries and translated to many languages. In Finnish he has published poetry collection Kaukana mereltä (ntamo, 2016, translation Jukka Mallinen).

15:00-17:00 I Henna Tattoo Workshop offers children possibility to decorate themselves with variety of henna tattoos. The workshop is held by Visual Artist Abida Jahan.

15:00-17:00 I Bag Printing Workshop offers festival guests possibility to print themselves own Puhos bag. The workshop is held by visual artist Riku Mäkinen.

21:00 I Community based composition for Puhos is a collaboration between composer Pekka Toivonen and East-Helsinki based youths Saartu, Faylan and Aweys. The first public performance of the composition takes place in public space in the middle of Puhos Mall. The composition and a workshop where the piece has been developed are produced as a part of the Finnish Museum of Contemporary Art Kiasma Theatre URB17-Festivalprogramme.